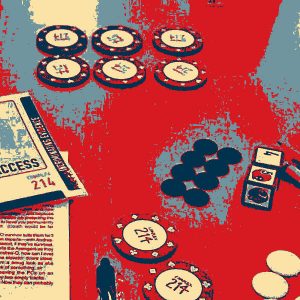 I have written before, probably elsewhere, on the matter of inspiration and the spawning of new ideas. People have different ways of sparking their creativity, or find ideas coming to them in specific situations. It’s that principle that causes writers to keep a notepad by their bed, in case they wake in the middle of the night with a brilliant insight. You have the notepad to hand to ensure that nugget of creativity doesn’t escape you.

I have those moments of inspiration in the shower.

This past weekend, I attended Indiecon – at a holiday park near Christchurch in the south of England. I planned to run three games, two of which would continue my testing of the 214 system. Unfortunately, due to some administrative shenanigans, I found my first two sessions duplicated and ended up running an additional fourth session on Saturday evening.

One key achievement of that evening session – where I ran the PARANOIA adventure ‘Stealth Train‘ with 214 mechanics – came from one player’s efforts to stay out of the action and accumulate copious notes on the misdeeds of colleagues. It occurred to me, while in the shower, that my game system needed to have a means to get people to indulge in teamwork AND erase their sins in the process by making others look less capable.

The analogy occurred to me of the zombie horde and the two survivors running for their lives. The survivor with the best chance of survival doesn’t need to outrun the zombies – he just needs to keep ahead of his colleague. I needed that character hiding behind the vending machine scribbling notes to come out, help the team, and just come out looking better than them. He needs to visibly contribute to the success of his team more often than the least of them – that’s all. To do that, he needs to spend more points than them – and in the mechanics of 214, that’s why team get to spend pool points before the person taking the challenge.

The solution, therefore, comes by starting all characters with Incriminating Evidence tokens. I established in the background for the game that they have plenty to be guilty about. So, if I give them 5-points of Incriminating Evidence at the start of the game and a player character can only lose a point by aiding in a challenge spending their own points they have a reason to help. You make yourself look better at the expense of the person who initially failed their roll and come out smelling of roses.

In a one-off con game, success comes by ending the session with the least number of Incriminating Evidence tokens in your pool. I still have to ponder the significance of emptying your pool in a long term game.

The final morning of the con, I managed to miss the start of roll call for the early game – which meant my game dropped to the bottom of the pile. By the time I arrived I found my 5-player signups had dwindled to 3 players – but, that may well have been for the best. The gaming area had quite a background noise level the previous day and with a lot of people around the table, it required much shouting on my part to get any information across. Fewer players also meant I could concentrate on getting the challenges in and engage the mechanics in progressing the story.

With new Incriminating Evidence mechanic in place, my session of The Dee Sanction went very well indeed. It ran to exactly 3-hours in length and ended with the character coming out victorious and Queen Elizabeth saved. The players provided good feedback – and specifically picked out the Incriminating Evidence mechanic as a good way to foster the counter economy and general teamwork.

I could see they had an interesting time unravelling the investigative conundrum as well. The adventure ran a little differently to the previous occasion at my local gaming group, partially due to their valuable feedback and also due to a different tact from the Indiecon team. I will take the output from both of these sessions and feed them into both the adventure design and the mechanics of the game.

A weekend (and a shower) well spent.